Posted by Chris P at 09:08 No comments: Links to this post

Country Joe and the Fish

You cannot imagine the relief when your train actually turns up, your reserved cycle space is actually there, you're moving very fast westward and you're listening to Country Joe and the Fish. After two very unpleasant days, that feels very, very good.

En route, a brat decided to fiddle with my bike. When I told him to stop, his dad said 'he's only a little boy', so I suggested maybe the fault lay elsewhere. People, don't you just love them. Or maybe - and this is unlikely - I'm a right grumpy bastard.

Bad planning - again
When I booked my ticket - incidentally, the English version of the SNCF website says you can't reserve bike space online, but the French version lets you do just that - at the end of the booking, they suggested 'partner hotels' which could be added to the booking. As one seemed astonishing value, I did just that. Foolishly, I assumed that, if you were coming by train, it would be close to the station. It isn't.

So that's kind of it. It's about a 2hr cycle to Roscoff, apparently lovely, so hoping for good weather. I wonder - doubtless you do too - why I do these things. But in the long run, everything is pointless, isn’t it? I must say, I'm looking forward to being home again. 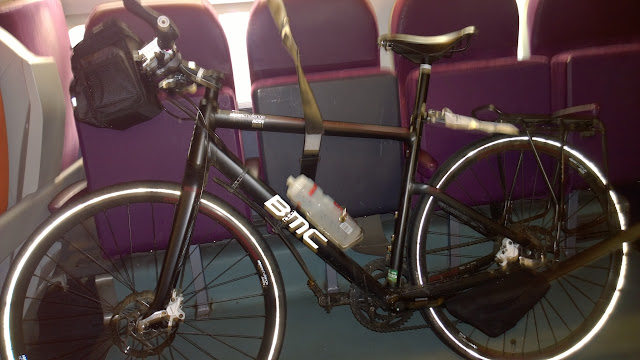 FIN
Posted by Chris P at 10:21 No comments: Links to this post

How does it work? I could just about see how Magny-en-Vexin could be twinned with Chipping-Norton (see earlier blog) but today I noticed that Vernouillet is twinned with Cheddar. Now I don't know if you have been to Cheddar. I admit it is somewhat touristy, but it is fundamentally ok. Vernouillet is like Slough but without the charm of many Indian restaurants, and, of course, the legendary Trading Estate. I bet it wasn't Cheddar who asked first, I'm just amazed they said 'yes'. Later, I went through La Loupe, twinned with Royston, so I had to take a picture for Roy, but it's on my phone and this cheapskate place only allows one device to connect to the Internet. So, sorry, no pictures today.

Last night, after the pichet de rouge, I thought 'sod it, I'm going to cycle the whole way'. This morning, it was raining hard so I had a bit of a change of heart. I've booked a bike space on the train from Le Mans to Morlaix, so I've sort of given up. I still have to get from here (La Ferté Bernard) to Le Mans by lunch time, but an early start should sort that.

Like du Maurier's curate's egg, it's been a very mixed trip. Lovely seeing Thessa and Marie and Stan, but overall spoilt by the weather. Favourite stages? Oddly, Holland. Cycling is a dream there and you always feel safe on the road. And it's flat, although there is a hill if you look very hard. And the Dutch are, well, nice. On the whole, the French treat cyclists with more respect than the English, but their suicidal driving style and astounding lack of anticipation does not relax. I think when the French take the driving test, they should always be told they've failed.

So, Philip, I hope that answers your question, and thank you for posting.

Finally, I know why there are no Cuckoos in England, they've all moved to France in anticipation of Brexit.

Tomorrow, the final edition. Will the perfidious, striking French keep our hero from home and slippers?
Posted by Chris P at 09:15 No comments: Links to this post

I'm sure you have other things to do with your life, but thanks for commenting.

The IPA was fine, better than Heineken, that's for sure!
Posted by Chris P at 00:19 No comments: Links to this post

This will be brief.
Have you noticed how much better everything seems after a bottle of red? Just a thought.
Lovely meal on the terrace of an Italian restaurant overlooking the Renault used car lot. Nice touch.
Posted by Chris P at 10:38 1 comment: Links to this post

Both me and the trip.
I confess to a certain amount of knackerdom. Being emotional and impulsive, the decision is 'home, James'. Unfortunately, James isn't around and I am not keen on cycling the outstanding 520 km to Roscoff. Normalement, one would pop on a train, but it's not that easy. The Frogs are, comme d'habitude, on strike, so one has to turn up at the station and see if there's a train. So I can't book anything until I know the outcome. Merde, alors, with a bit of putain thrown in for good measure. Zut!

I have a brilliant but cheap hotel. The down side is that it's in an out of town shopping centre and you can't really get into town on foot.

Some of yesterday's photos : 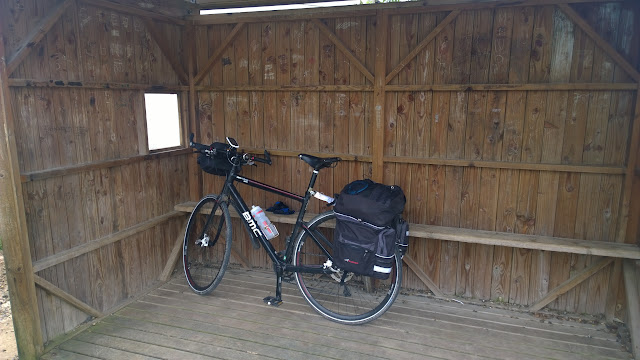 bus shelter handy during a storm. 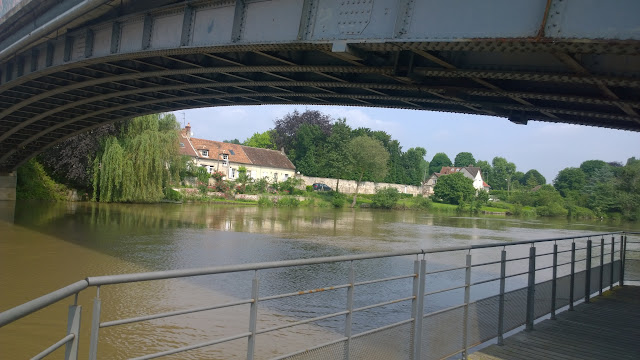 Rather fine cloth hall in Compiègne.

You wouldn't believe you were so close to Paris.

The Seine is down there somewhere.

Anyway, I’m off for some scoff.

Evening all.
PS Dreux
Posted by Chris P at 08:58 No comments: Links to this post

I forgot to say, I'm in Magny-en-Vexin, which proudly proclaims itself twinned with Chipping-Norton (sic). It has the advantage of a complete lack of Rebekah Brooks, Call me Dave and chums.
Posted by Chris P at 13:03 No comments: Links to this post